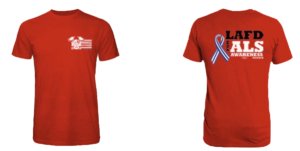 UFLAC, LAFD, and Stevens Nation have joined forces to promote and support ALS Awareness during the month of May. As you know, we recognize October as Breast Cancer Awareness Month and participate in “Movember” during “No Shave November” to bring awareness to men’s health issues, such as prostate cancer and testicular cancer. Now it is time to raise awareness for all those diagnosed with Amyotrophic Lateral Sclerosis (ALS), including one of our own Firefighters, Eric Stevens.

Eric was recently diagnosed with ALS a month after getting married. His hope is to shed light on this underfunded disease, start a dialogue, and motivate people in power to make changes that allow terminally ill patients to have access to treatments that are still in trials but are proven to be safe. Stevens Nation is advocating for patients who don’t have a year or two to wait for treatment to have access to this medical care that might drastically reduce their suffering. For more information, please visit https://stevensnation.com and follow #AxeALS and #PushForTreatment on social media.

The primary goal of the LAFD and UFLAC’s involvement in ALS Month is to support those personally affected by ALS and to reach thousands of people with the message that individuals suffering from ALS are in a race against time for life-saving treatment to be approved by the FDA.

All members are authorized during the month of May to wear the newly designed ALS/LAFD T-Shirt while on duty to support ALS Awareness. By this very public display of wearing red T-Shirts, LAFD Firefighters and Paramedics can help to raise public awareness and speed up the approval of treatment options for this devastating disease. We encourage all members to wear your Axe ALS t-shirt from last year or purchase a new one from Stevens Nation.

Thank you for your support!